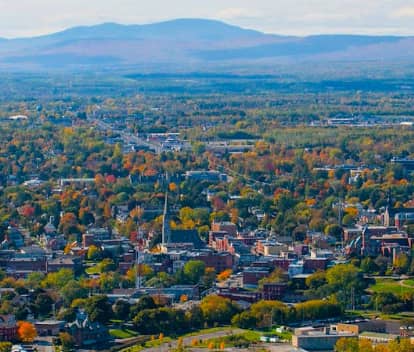 The World Transformation Movement’s global network of WTM Centers promote the life-changing and world-transforming explanation of the human condition put forward by Australian biologist Jeremy Griffith — see HumanCondition.com. This WTM Center in Plattsburgh, in the North Country of New York, was established by Bob Montefusco to help ensure this psychologically reconciling and rehabilitating breakthrough understanding of human behavior reaches every human.

“When understanding of the human condition catches on, and it will catch on, it’s going to be like a firestorm. This will heal the world like nothing else will, transforming mankind and fulfilling the whole human journey!”  Bob Montefusco

Bob Montefusco was born and raised in Queens, New York City. In 1966, after graduating high school, Bob joined the United States Air Force (USAF), serving as a Crew Chief in the Strategic Air Command (SAC), supporting Operation Chrome Dome alert missions. After leaving the USAF Bob supported his family in various blue-collar trades. Bob and his wife Nancy have been married for over 50 years, and have five children, 13 grandchildren and, delightfully, five great-grandchildren.

Download this transcript as an A4 or US Letter PDF

Hi everybody, I’m Bob Montefusco. Sometimes they call me ‘The Count’.

I came across Jeremy Griffith’s book FREEDOM: The End Of The Human Condition several months ago and I’ve been reading, studying and going through it and I have to say that it was the most incredible thing I’ve read. I’ve been looking for the answer to my own issues, my own condition you might say, for many years and this has answered it for me. Not only for me, but I see it as a world-saving humanitarian…I don’t even want to say humanitarian…it’s just a transformation of mankind, to understand our condition.

So anyway, with that said, I’m proudly announcing that I am going to be opening a Center for the World Transformation Movement here in the North Country of New York State in Plattsburgh, New York. And I sincerely hope that some of you out there may get interested and contact me. Thank you very much.

I was born in New York City, New York, in one of the outlying counties — Queens, they call it. I left there when I was 18 years old. I went to parochial [parish] grade school, and then I went to public high school. I seemed to always feel inadequate around people, so I was never one to join in on whatever was going on in the neighborhood; I always kept outside the bubble somehow.

Anyway, that being said, I left there when I was 18 years old to join the United States Air Force. I didn’t have any college education, I just went to the Air Force and spent my time playing with airplanes and whatever else we were supposed to be doing. I served in the Air Force from January 1966 to January 1970, during the Vietnam conflict. I was in SAC, which was the Strategic Air Command.

I came back and today I’m married. We have five children. I don’t know how she stayed with me for 54 years, but she did, because I was awfully, awfully, awfully, terribly uncooperative, “Do it my way or don’t do it at all”, pain in the neck, I would say, and how she stayed with me I have no idea. Anyway, we have five children, which gave us 13 grandchildren and now we have four, with one on the way, great-grandchildren, and that is the most amazing thing for me now — to have the opportunity again to nurture some children, some great-grandchildren, it’s just incredible.

But that’s where I’m at. I don’t know how I got here. I fell into a pit, a big dark pit, I would say 25 years ago. I didn’t know what to do. I was lost completely. I can remember the moment, where I was standing, who was present, and how I felt, and I fell into a pit. And somehow I unresigned to something and I found my way into other spiritual places and programs, and 12-step programs, and other things throughout time and then this shows up and it solidified everything that I’ve learned about myself and about the human condition. The book FREEDOM, and Jeremy Griffith’s information — however he put this together — has solidified for me what you could say a spiritual journey and a scientific journey and has taken it and culminated that into, what I understand to be for me, the integrated meaning [of life] and that’s an incredible place to see, I’ll tell you that, and to be, for me anyway. I don’t know how anybody else sees that, but that’s an incredible thing for me — because there is no other way than what’s been given to us, not just by Jeremy, but by all of the prophets, scholars, philosophers throughout history, to maintain that journey for us to now — and here we are. It’s amazing.

It’s a very simple, simple solution. But I have to back off that, because I get excited inside me and I want to take it from here — this light that’s in my chest — and stand up and come over to you and go put it [this light] right in your chest so you have it.

You know, I would recommend to anybody who might be interested to look up the World Transformation Movement and listen to THE Interview — even download it, it’s free — and read it several times, because you might not understand it right away. And I’m like that; I have to read something 3, 4, 5 times before it really sinks in and I get the true meaning of what’s being said. So if you feel like “I don’t know what he’s talking about”, back off, read it again. Just be careful and slow. It will be alright!

You know it was [Jeremy Griffith’s analogy of] the Adam Stork story [presented in Video/​Freedom Essay 3: THE Explanation of the human condition] that really got my attention because it described the human condition and gave me an understanding of it and that led me to further delve into the book and Jeremy’s essays. To me, once the reference was made to Adam and Eve, that stuck with me. I even looked up the references in the Bible and read it and thought, “Yeah, [the analogy represents] the end of innocence”, so to speak. When Adam Stork flew off the island, that was the end of innocence. We were [humanity was] on the journey and I understood that. I understood that that’s what happened. That’s exactly what happened. That was exactly what happened.

Recently my wife has even commented, she said, “What’s happened to you? You’re so calm now. You don’t seem to get excited [agitated].” I said, “You know, honey, I noticed that. What happened? I’m just calm inside.”

So, the book FREEDOM…it’s not a thesis, it’s what? It’s a culmination, yes! There are no words really that can emphasize or speak to the truth of how this all connects to all the time we’ve been at this [journey of gaining understanding of ourselves, our human condition] unless you are a person who is willing to at least look this way.

That all being said, my friends, I welcome you to this journey of healing our human condition. And please visit our website, ask questions — we’re here to answer them for you. God bless you all. Have a nice journey.

UNDERSTANDING THE HUMAN CONDITION BRINGS AN END TO THE HORRIFIC POLARITIES IN HUMAN LIFE, INCLUDING IN THE WORLD OF POLITICS

Biologist Jeremy Griffith’s breakthrough resolution of the underlying problem in all human affairs of the human condition enables the true reconciliation of all the polarities of life that have existed under the duress of that anguished state — between instinct and intellect, idealism and realism, spiritualism and materialism, religion and science, women and men, and the left-wing and right-wing in politics.

In fact, understanding the human condition unravels and makes sense of the whole seemingly impenetrable and insoluble confusion of human life — and does so in such a simple and obvious way that it brings to mind Thomas Henry Huxley’s famous response to Charles Darwin’s idea of natural selection: ‘How extremely stupid of me not to have thought of that!’

READ how Jeremy Griffith’s explanation of the human condition obsoletes the conflict between the philosophically opposed left and right wings of politics. MUST, MUST WATCH: Craig Conway, the acclaimed British actor, writer, producer and broadcaster — and the founder of WTM North East England Centre — has brought all his skills to bear to produce the ideal introduction to Jeremy Griffith’s explanation of the human condition in this absolutely astonishing, world-changing and world-saving interview with Jeremy. It’s called ‘THE’ Interview because in it Jeremy gives such a concise and accessible summary of his world-saving explanation of the human condition that it’s nothing less than the most important interview of all time!

Alongside the original WTM Centre in Sydney, Australia, World Transformation Movement Centres are being established around the world to help bring to everyone the now desperately needed all-relieving and all-explaining biological understanding of the underlying issue in all of human life of our troubled human condition.

Visit the WTM’s Transformation page to learn more about the formation of these Centres. You can access the following examples of WTM Centre websites by clicking on their images below.

Subscribe to our YouTube channel and receive two or more videos each week. These videos will include enthralling, bite-sized samples of the explanation of the human condition, and also descriptions and examples of the transformation that is now possible for all our lives.